Yes, an "American version" of it.

While the address did not embrace the populist, anti-Semitic form of fascism popular in Europe at that time, it did propose to rework the American government to a structure that was decidedly fascist in nature, and openly admitted as much.

The original claim came from Seva Gunitsky, an assistant professor of political science at the University of Toronto, on Twitter. 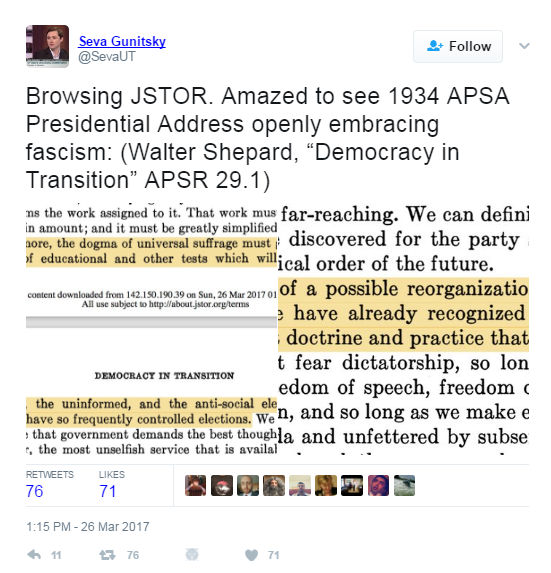 Gunitsky is an expert in this area. His forthcoming book from Princeton University Press is on the spread of Democracy, and in particular how Democracy triumphed over the fascist counterwave.

While fascism never gained much political power in America in the 1930s, there were many prominent figures who believed that American democracy had failed and some fascist reforms might be necessary. Additionally, it is a matter of some debate as to how accepted fascism was at the time, and to what extent American fascism resembled its European counterparts.

Gunitsky's find is interesting because it shows a world where, even if fascism may have not gained much political power, it did hold an intellectual power among the elites. Here we try to parse out its significance.

Context of the Original Address

The American Political Science Association is a prominent professional organization for political science students and scholars. The presidents of the association are elected to one-year terms, and part of their responsibility is to deliver an address at the annual meeting. This address is later printed in one of the journals published by the association.

In 1934, Walter J. Shepard, a professor of political science at Ohio State University, was the president of APSA, and gave the address that year.

The Address Embraces Many Elements of Fascism

He goes on to outline a party-less political meritocracy that looks much like fascism. Capitalism is to be replaced by a planned economy. All power is to be centralized in the federal government, and the states to be done away with. The distinction between the legislative and executive powers should be abolished, with the Presidency granted broad policy-making and legislative powers, bounded by unelected advisory councils. The Supreme Court would cease to be so much a legal institution as much as a mechanism for continuity of government.

Finally, he argues that the electorate is (and was) meant to be merely a mechanism for representing the interests of the people, but due to how easily people are misled, it is an imperfect mechanism. Given that, he argues the system of "one man one vote" must be replaced by a meritocracy, where only the competent govern:

Furthermore, the dogma of universal suffrage must give way to a system of educational and other tests which will exclude the ignorant, the uninformed, and the anti-social elements which hitherto have so frequently controlled elections. We must frankly recognize that government demands the best thought, the highest character, the most unselfish service that is available.

We must admit, as did Aristotle, that an aristocratic as well as a democratic element is necessary in government—not an aristocracy of wealth, or class, or privileged position, but an aristocracy of intellect and character. H. G. Wells is right in insisting that "we want the world ruled not by everybody but by a public-minded organization open, with proper safeguards, to everybody." We can add that such an organization must be immune to the pressure of propaganda and to the seduction of special interests. The implications of such a change in the electorate with respect to the party system are far-reaching. We can definitely question whether any place can be discovered for the party system, in its present form, in the political order of the future

And finally, he notes that if this sounds like fascism, well, it is, sort of – it's the best elements of fascism. What he imagines is a sort of fascism that operates as an elite aristocracy of intellectuals, but is bounded by fundamental rights that are suppressed in European fascism:

If this survey of a possible reorganization of government suggests fascism, we have already recognized that there is a large element of fascist doctrine and practice that we must appropriate. But we need not fear dictatorship, so long as we preserve the guarantees of freedom of speech, freedom of the press, and freedom of association, and so long as we make education, untrammelled by propaganda and unfettered by subserviency to any end or purpose, the central goal, the supreme value of our civilization.

Shepard's Opinion Was Not That Odd For the Time

To what extent should we look at Shepard's view as being emblematic of larger trends in play at that time? In Democratic Faith, Patrick Deenan, professor of political science at Notre Dame, says they were more representative than one might think:

It might be easy in retrospect to dismiss Shepard as a bit of a crank or mis-guided authoritarian. Yet, he was a respected and influential figure in the American academy, and delivered this speech as president of the American Political Science Association (APSA), which was then and remains the main organization of the discipline. His sentiments were far from unrepresentative of the views of leading figures in the behavioral revolution in the years preceding World War II. They reflected the logical conclusion of many then contemporary ideas about the insufficiencies of democratic institutions and its citizens.

He then goes on to list a number of high profile intellectuals of that time who would have agreed with the idea that American democracy had failed, and something new was needed.

It's worth noting, however, that very few in this list would have embraced fascism per se. Certainly McDougall and Barnes had broad sympathies for German Nazism, but many other intellectuals on this list simply believed that American democracy had failed and must be superceded by something else. Underlying this was a central thesis: the defining test of democracy could not be participation, but had to be results.

The APSA speech clearly embraces many (if not most) elements of fascism, even if it rejects elements of the populist fascism of Europe and Huey Long. Gunitsky's point here – that an open embrace of fascistic values was acceptable among American intellectuals of the early 1930s is well-supported by the evidence.