Did the Golden State Warriors actually vote to not attend the White House?Updated automatically every 5 minutes

As of 1:13 p.m. on June 13th, there was no decision on a White House visit from the Warriors. In fact, the Warriors have not been invited to the White House at this time, and no vote was taken. Snopes concurs.

At 7:10 a.m. EST on June 13, 2017, less than 8 hours after the Golden State Warriors won the NBA title, financial reporter "Downtown Josh Brown" tweeted that the Warriors voted to not attend the White House

At 1:02 p.m. on June 13, 2017, Andrew Kaczynski of KFILE/CNN, tweeted out a team statement that says the Warriors have not made any such determination.

And, yet, at 1:32 p.m. on June 13, 2017, people are still sharing a story based on Brown's tweet. Here is MSNBC's Joy Reid sharing an article from the Atlanta Journal Constitution that appears to side with Brown despite updating the article to include the team's statement.

So, did the Warriors actually vote to not attend the White House?

Many of the players on the Warriors and the staff of the team have been vocal about their dislike for the President. Shortly after their win, financial reporter Josh Brown tweeted they would be skipping the traditional visit, according to "sources"

According to NBC Sports, Brown claimed the source to be another tweet, this one by a self-proclaimed "celebrity expert" and activist: 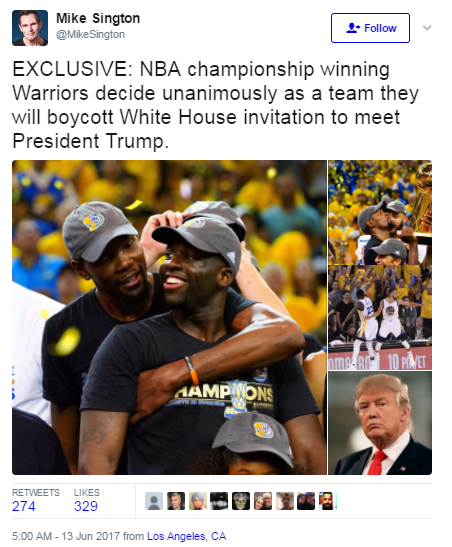 No source was given, and Sington has no known connections to the team or its players. Sington looks to have a history of making up stories to see if they will hit, as with this one, which claimed Broad City was going to "bleep out" President Trump's name in its next season. 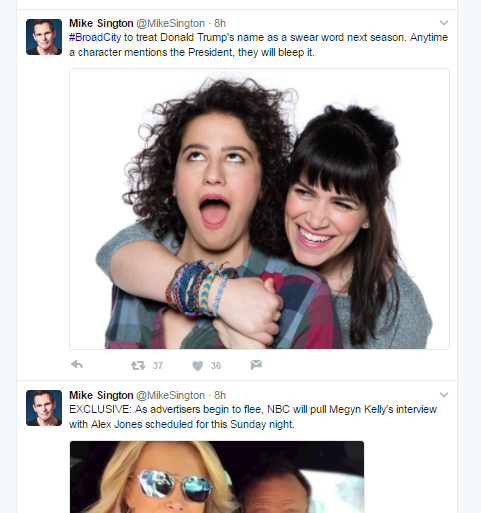 Adding to the confusion, the tweet came out after Brown's, though it may be possible that Sington posted an earlier version and later replaced it.

In any case, though the Warriors may indeed reject a visit or the President may refuse to offer them one, the story that they unanimously rejected an invite appears to be made up out of whole cloth. There has been no invite, there seems to have been no vote, and the people responsible for starting the story cannot cite a credible source.