When did we begin standing for the National Anthem?

According to multiple sources from the turn of the century, the custom of standing during the American national anthem goes back to a West Point ceremony in 1891. However, it the history of its observance more complex, and the tradition of NFL players standing for the anthem dates back to only 2009.

While the Star-Spangled banner was not designated by the president as the national anthem until 1916, and not by Congress until 1931, the anthem was long favored by the military. As the civil war broke out, the anthem took on a specific significance: the song's insistence that a single flag wave over the "land of the free" seemed fitting for a war the North saw as both about national unity and slavery. It became known as the "Song of the Union" and the elder Oliver Wendell Holmes even wrote an additional verse to it, calling out the treason and injustice of the South directly:

When our land is illumined with liberty's smile,

If a foe from within strike a blow at her glory,

Down, down with the traitor that dares to defile

The flag of her stars and the page of her story!

By the millions unchained, who our birthright have gained

And the Star-Spangled Banner in triumph shall wave,

While the land of the free is the home of the brave. 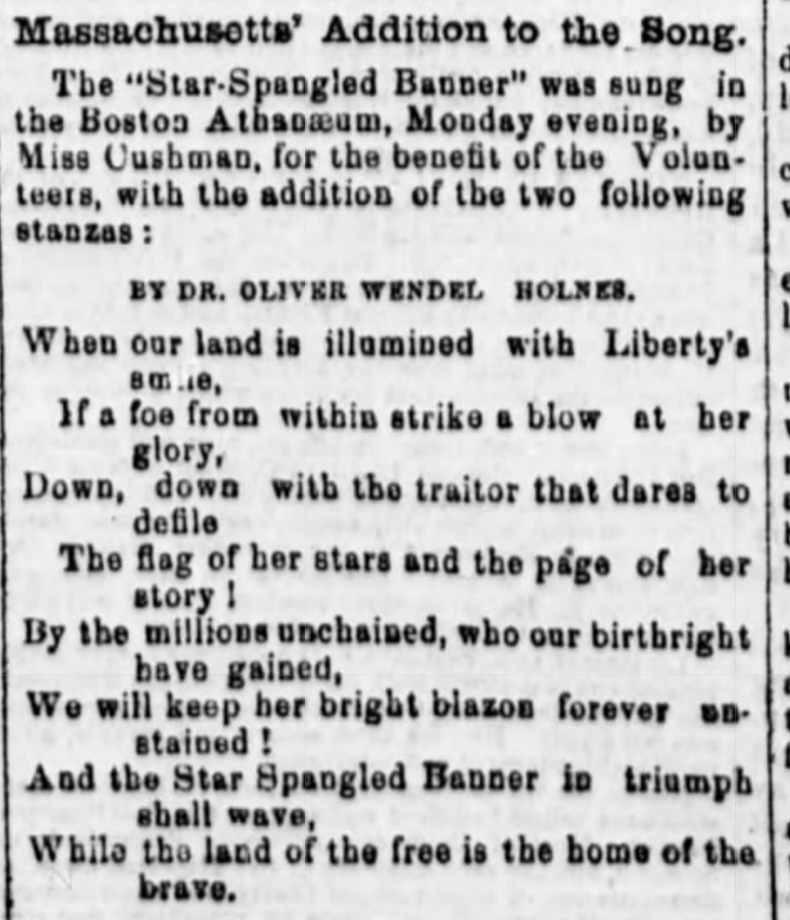 After the war, the song remained the unofficial anthem of the U.S. military.

Standing during the anthem, however, was not a tradition until until long after the song obtained prominence. An 1891 article in Arthur's Home Magazine decried the way the American public treated the song. According to the article, less than half the audience recognized the tune when played. The article suggested that by use of some outward action those who recognized the song should call attention to its importance. 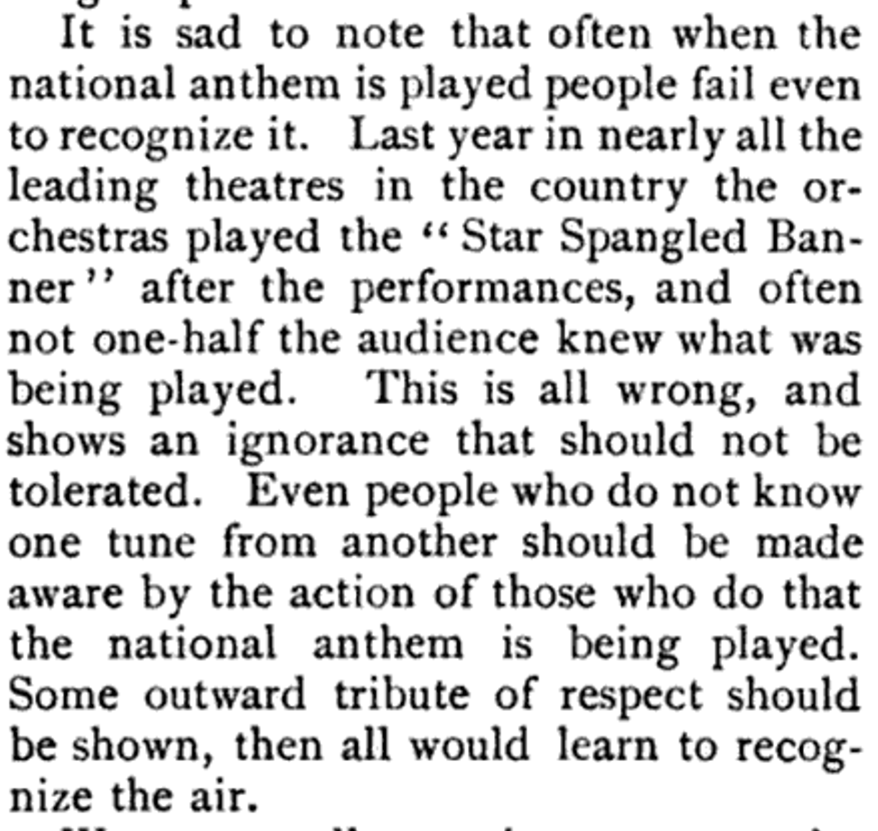 The journal then suggested that the public should follow the example of Senator Julius C. Burrows, who had recently implored the audience to stand during the anthem at a West Point graduation to resounding success.

This 1891 incident at West Point is also recounted in a 1917 history of Senator Burrows:

Toward the close of his speech Burrows said, "Soldiers should not be heedless to the sentiment of their songs and to the music of their bands. ... I would like to see every true American, soldier or citizen, when he hears the grand notes of our National air, rise to his feet in patriotic recognition and uncover."

Almost instantly the band began to play the "Star Spangled Banner," and Colonel Wilson, the Superintendent, and the entire battalion of cadets responded to Burrows patriotic suggestion by springing to their feet with a common impulse, which action was followed by every person in the audience, and all stood with bowed heads until the last note had ceased. It was an impressive sight, and attracted much public attention. Later, as a result of Senator Burrows agitation, the Army Regulations were made to prescribe this action, but it required no legislation to have the custom become universally popular. To Burrows, then, belongs the credit of first suggesting what has now become an unwritten law of the Nation.

In addition to the article in Arthur's Home Magazine, the event is said to have received broad notice. Similar events followed. Two years later in Tacoma, Washington, Rossell G. O'Brien proposed a motion that those in attendance at the Order of the Loyal Legion remove their hats and stand for the anthem. By 1900, the Republican Party was standing up for the anthem at their convention.

By the turn of the century, partially at the urging of Senator Burrows, standing during the anthem was made a requirement for military personnel at events attended by them in their official capacity. This honor was to be reciprocated to the anthems of other nations as well.

"When the Star Spangled Banner is played by the band on a formal occasion at a military station, or at any place where persons belonging to the military service are present in their official capacity, all officers and enlisted men present will stand to attention. The same respect will be observed toward the national air of any other country when it is played as a compliment to official representatives of such country. Paragraph 383, Regulations, U. S. Army, Ed. 1904. 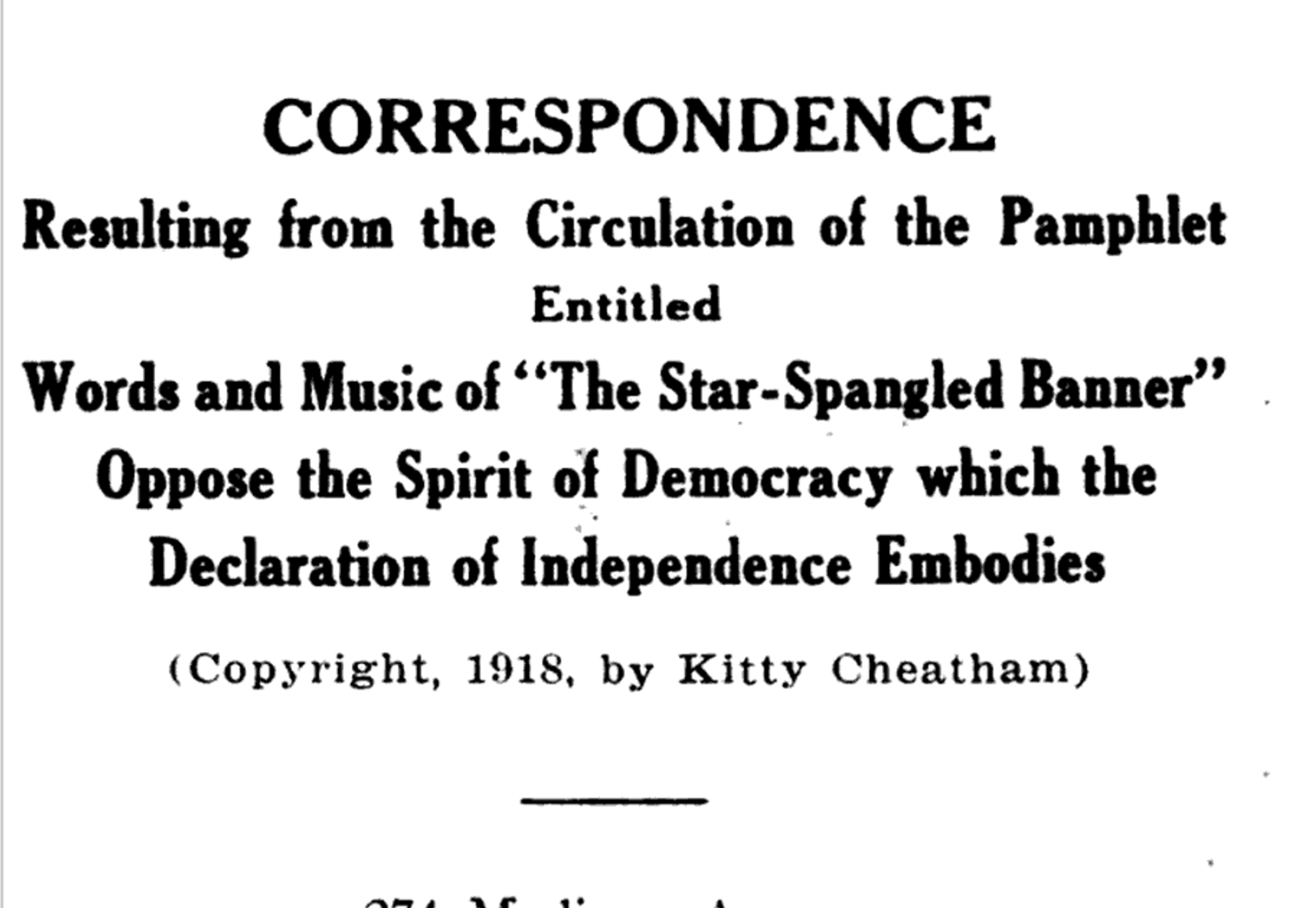 Much of the interest in the anthem in 1916/17 came out of the new nationalism of World War I. The significance of the anthem grew in the 1918 World Series. Originally slated to be cancelled out of respect for those in uniform, the series was revived when it was found out that soldiers overseas had been looking forward to hearing the results of it. As was usual in Boston, the anthem was played in the seventh-inning stretch. Perhaps because the anthem was played during the stretch, and not the beginning, the audience rose to their feet along with the players and sang along.

Perhaps to quell the fears that attending a baseball game during wartime was unpatriotic, the New York Times spent several paragraphs recounting the scene in 1918:

"As the crowd of 10,274 spectators — the smallest that has witnessed the diamond classic in many years — stood up to take their afternoon yawn, that has been the privilege and custom of baseball fans for many generations, the band broke forth to the strains of 'The Star-Spangled Banner.'

"The yawn was checked and heads were bared as the ball players turned quickly about and faced the music. Jackie Fred Thomas of the U.S. Navy was at attention, as he stood erect, with his eyes set on the flag fluttering at the top of the lofty pole in right field. First the song was taken up by a few, then others joined, and when the final notes came, a great volume of melody rolled across the field. It was at the very end that the onlookers exploded into thunderous applause and rent the air with a cheer that marked the highest point of the day's enthusiasm."

While a number of accounts cite this as being the beginning of using the anthem in sports, the anthem had actually been used for a number of years prior. The standing, however, seems to have been new. Here is a an account from two years prior, in the 1916 World series, when the custom was merely to remove one's hat. 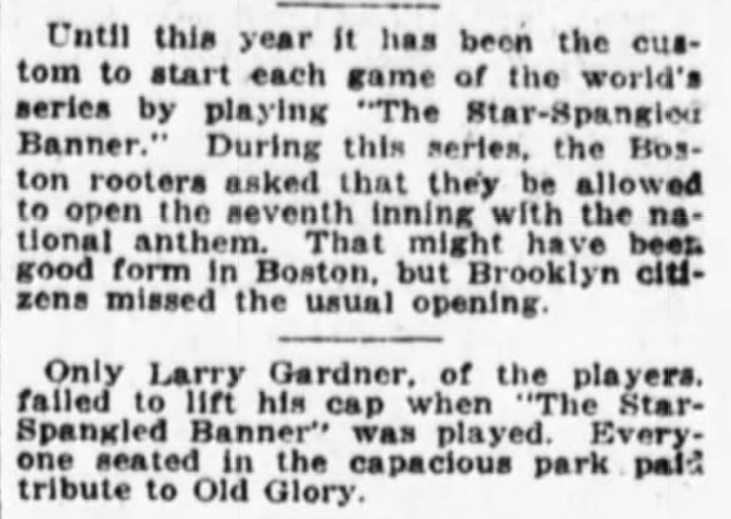 Over time, the national anthem would become a fixture of baseball, although its observance and importance varied over the years. This tradition later moved into football.

Regardless of where one stands RE: Colin Kaepernick deciding to sit out the "Star-Spangled Banner" one shouldn't be misled into thinking this is a longstanding tradition Kaepernick is sitting out.

NFL spokesman Brian McCarthy confirmed this morning the practice began in 2009, adding, "As you know, the NFL has a long tradition of patriotism. Players are encouraged but not required to stand for the anthem.

Before 2009, teams would generally wait out the national anthem in the locker room. While it is not clear why the change was made, it's noteworthy that the military has a history of paying the NFL for sponsored acts of patriotism, and it's possible this may have had some influence on the perpetuation of the practice.