Did Students Sign a Petition to Ban Trump-Supporting Professors?Updated automatically every 5 minutes

The question is "Did Students Sign a Petition to Ban Trump-Supporting Professors?" and from what I can tell so far it is mostly true because Cebot Phillips from campus reform did go and have people sign a petition, however, the petition was a fake petition that was just meant to see what people would say if they were asked that question. 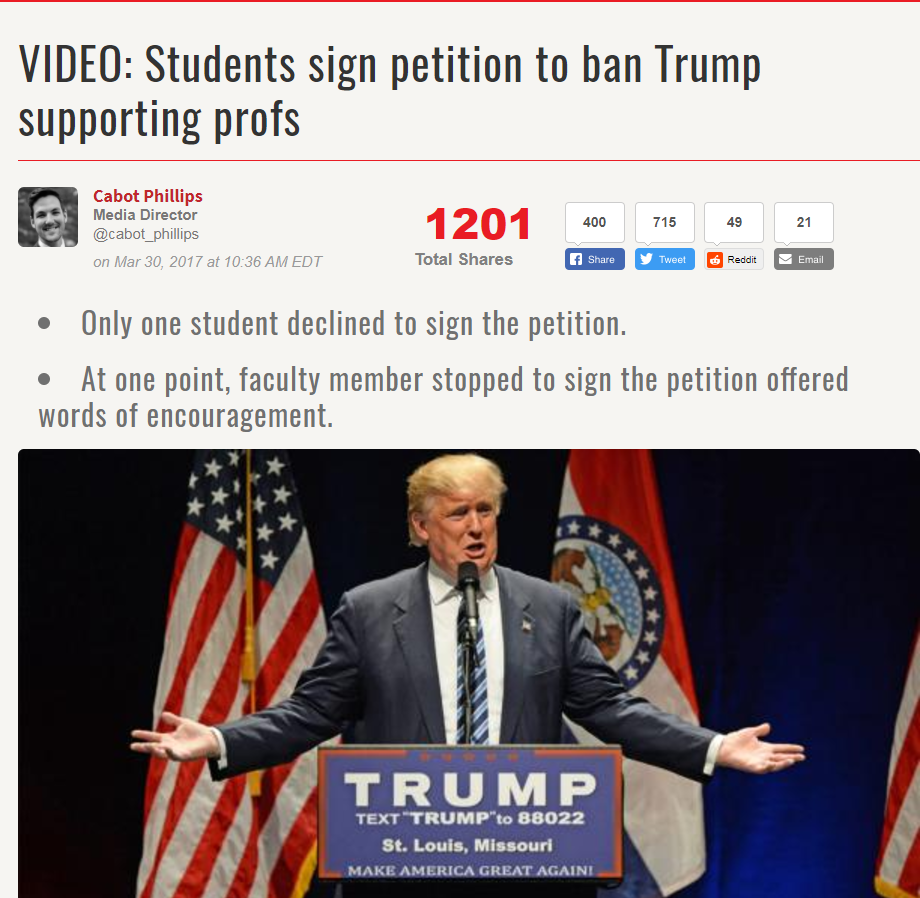 The Claim originated from the campus reform website and was also posted as a video on youtube. The Media Director of Campus reform went out on a college campus with a fake petition and asked students and even some faculty to sign the petition that wanted the college not to hire professors that voted for trump. He even cited reasons like if they hire someone that voted for trump they are basically saying that sexism and racism are ok and a student said "That's True. " in response. I also Found it being talked about on a website called the blaze and on this website they mentioned that it was a fake petition. I also found it on American lookout where they talked about how far left the opinions of colleges have gone. They mentioned that students today don't seem to want their opinions to be challenged. I found that there were a lot of places that mentioned the claim but that there was not much new information outside of where it originated from. On Clash Daily they go as far to call the students in the video "Brain Dead" and they ask "What happened to the free exchange of ideas?". This article is a prime example of how while at first it seems like liberals are attacking trump it actually just gave conservatives ammo to bash liberals in opinion articles like Clash Daily.

The Issue here is whether college students signed a petition to have pro trump professors banned from the campus and because there was a video of that happening it seems that at least that part did happen. However, the claim is misleading because it makes it sound like it is a real petition and as if something substantial might happen when based on what I found it would seem that the petition was a fake petition. It was meant to be a sort of behavioral experiment to see how far left the students on a college campus are and what they would say if asked such a question. In reality, it seemed to me that the article was click bait for liberals and just gave conservatives ammo to bash liberals based on the American Lookout article which was a conservative bias. I feel like campus reform is somewhat reliable only because they are looking to make a change on college campuses. However, I feel that the way the article was written ended up being unintentionally misleading. In this claims case, many of the facts were in the main article and the other websites were basically just repeating the same thing in their own words. Other articles like Clash daily just post vulgar opinions against liberals in response to the headline. They go as far as to call the student's brain dead. So all in all, it would seem that the event did happen, however not as many students signed as you might think when the article says a lot it seems to really mean a measly 20 students on a campus that probably has thousands. This is very misleading because the article makes it sound like all the students at colleges think this way when that is probably not the case. Also, they don't mention that it is fake and they assume that it is obvious that it is fake. It made it seem like that college might actually do what the petition said but that probably never would have really happened.

Steps I took in my research