As of February, 2017, a member of the California Assembly, Member Ed Chau, presented bill No. 1104 the California Assembly. The bill presented was The California Cyberfraud Abatement Act. This is an act to make it unlawful for a person, with intent to mislead, deceive, or defraud, to commit an act of political cyberfraud. The law defines "political cyberfraud" as any type of action that involves forming a political website with the intent intent to deny a person access to a trusted political Web site, or deny a person the opportunity to register a domain name for a political trusted web site. The act also claims "political cyberfraud" as to cause a person to reasonably believe that a political web site has been posted by a source other than the actual source who posted the Web site, and would cause a reasonable person, after reading the Web site, to believe the site actually represents the view of the proponent or opponent of a ballot measure. The law also goes on to state the definition behind a "political web site," which is a web site that urges or appears to urge the support or opposition of a ballot measure. This act attempts to enforce political cyberfraud through political websites as illegal, requiring a majority vote to be passed. The bill is still active in the California Assembly, and as of April 19, 2017, the bill is continuing to be amended. (California Legislative Information) The large debate with this bill is that people believe that a censorship bill is unconstitutional. Also, that the bill does not fully incorporate all forms of political fake news, therefore providing loopholes for journalists and bloggers who can quote false statements, which are not covered under the act. At a time when political leaders are promoting "alternative facts" and branding unflattering reporting as "fake news," there is an opinion of some that they do not think it's a good idea to give the government more power to punish speech, with freedom of speech being a right our country was built on. (Electronic Frontier Foundation 2017)

The first influential appearance of this claim was found when visiting the Electronic Frontier Foundation website, the soure provided a counter argument to the bill No. 1104. The bill was presented to the California Assembly by Member Chua on February 17, 2017. The argument specifically stated that a censorship bill is unconstitutional , and many could not believe it was true, which is why the foundation researched the bill, to then find out the bill was in fact real. This was the first set of evidence that showed the truth behind the claim of the bill. (Electronic Frontier Foundation 2017) Following this lead, that specific web site brought me to the actual bill itself, bill No. 1104, the California Political Cyberfraud Abatement Act, presented by Member Ed Chau in the California legislative February assembly on February 17, 2017. While both of these sources stated the fact that the claim is true, there is great variation between both of them. While one source is the actual text of the bill itself, with proof that the bill is still being amended as of April 19, 2017, and is still in process, the other source explains how the bill should be pulled, and had already been pulled on March 28th, 2017. Below are exmaples of how the bill is presented in a social media form versus a formal form. 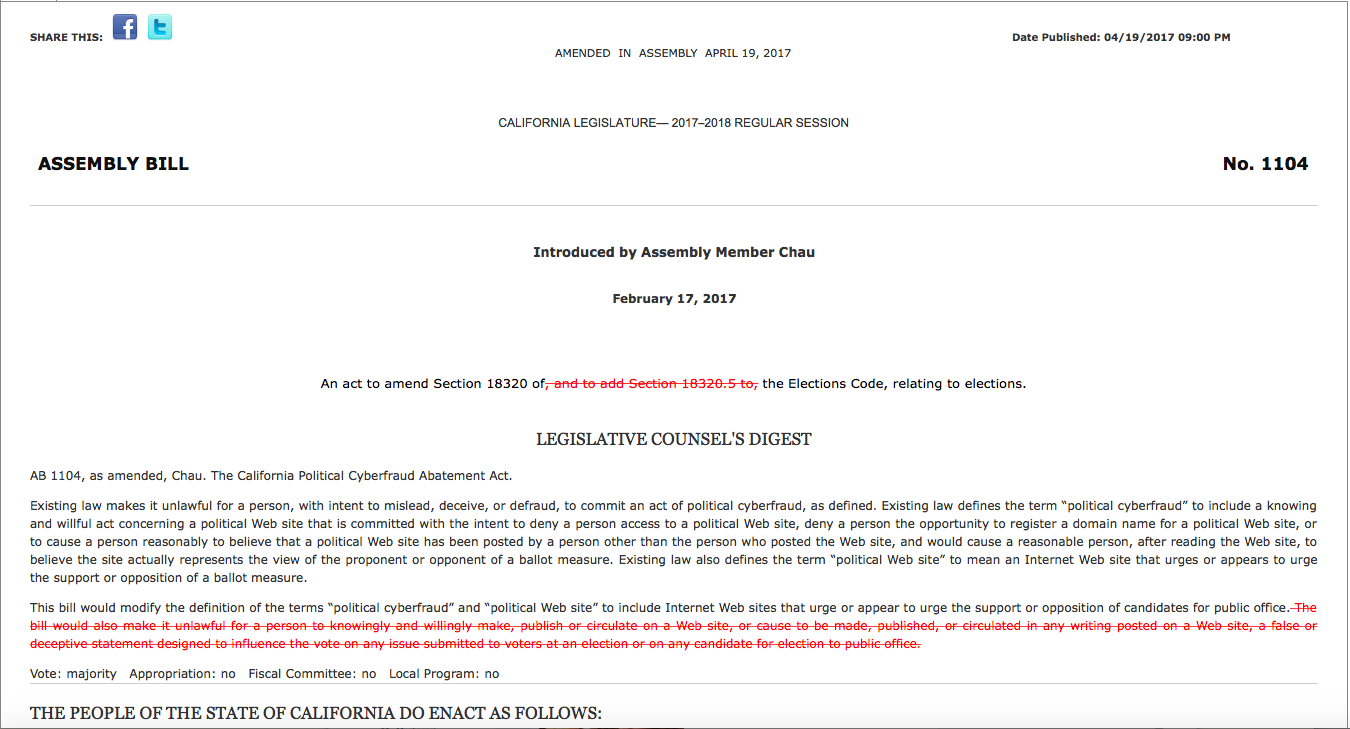 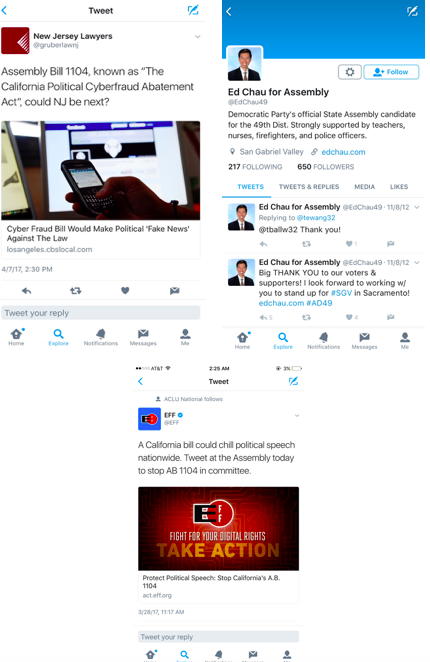 At issue here is the phenomenon of Fake News. The term gained during the 2016 election with regard to false information being presented as real in order to sway opinion to one candidate or another. While propaganda of any kind has been around for thousands of years, the rise of the internet and prevalence of advertising money has made it very easy for anyone to create a "fake news" website and disseminate whatever misinformation they deem beneficial to their agenda.

Further contributing to this story is that Fake News is by no means a politically neutral phenomenon. Donald Trump's rise to the top of the political playing field brought an antiestablishment streak to the campaign, and the candidate himself has been known to deal in conspiracy theories. After the 2016 elections, the term was turned against established media outlets who had published pieces critical of the president—President Trump called CNN "fake news" during his first press conference after the election, and since then he has tweeted numerous times decrying companies such as The New York Times and Buzzfeed as Fake News.

Thus, the California legislature's supposed bill "banning fake news" has a political bent. California is one of the most liberal states in the country, and went overwhelmingly for Clinton in November 2016. This bill plays into notions that the left is trying to suppress free speech, as well as the theory that without fake news, Donald Trump would not have won the election. This sets the stage for a contentious discourse around this article.

The bill is real. What is importatnt to remember, though, is that it has yet to be passed by any part of the California State Assembly and does not have the force of law. "CALIFORNIA TRYING OT BAN FAKE NEWS" is a headline that grabs a lot of attention, but the feasibility of the efforts and implications for political discourse and free speech are yet to be analyzed.