Does a viral photo of Donald Trump depict the President rescuing someone from floods during Hurricane Harvey?Updated automatically every 5 minutes

The image is clearly doctored and as Bethania Palmer points out in a Snopes.com article, the context strains plausibility.

This is the fake image, circulated in late August 2017 as Hurricane Harvey was still dumping rain on the Houston area: 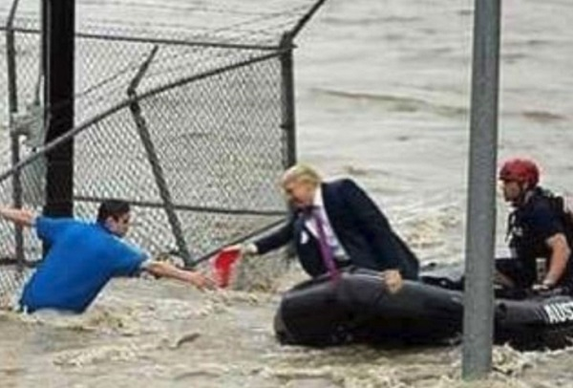 And this is the undoctored, original image: 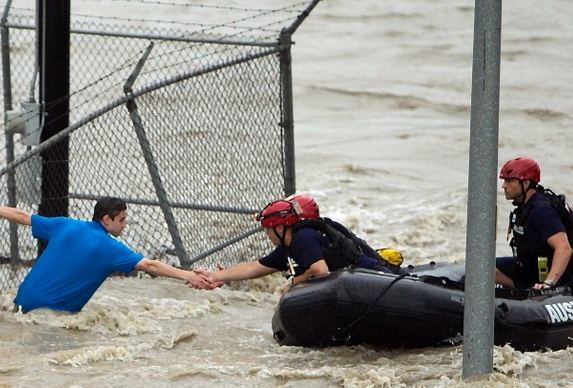 To be more precise, the second image above is cropped from a larger image, a photograph taken by Alberto Martinez for the Austin Statesman in 2015.

[Add a summary here of where you've seen claims about this on the web. For instance, if the question is "Does Citrus Prevent Stroke?" collect some places where that claim has been made. If possible, track that claim to its origin, whether it is a piece of scientific research, an opinion column, or a fake news site. Try to find the most authoritative origin. Note: this is the history of the claim or question being raised -- save the true or false stuff for the next section. Examples: 1, 2, 3]

[Add a summary here of the larger context for this question and any evidence that that helps answer the question of the title. For instance, if the question is "Does Citrus Prevent Stroke?" collect some both previous research on the benefits of citrus when it comes to stroke as well as talk about the relative strength of different types of studies. If the origin of the claim is in a journal, newspaper, or website, you could evaluate the reliability of that source. Examples: 1, 2, 3]